Chords, and how to make them

If you lead a busy schedule, a chord is a set of three or more notes. If you have time on your hands, you can worry over whether two notes constitute a chord. :-)

Here is an outstanding chord construction table from Cheater Theory (v2) by Howlin' Hobbit. The entire document is worth a read. 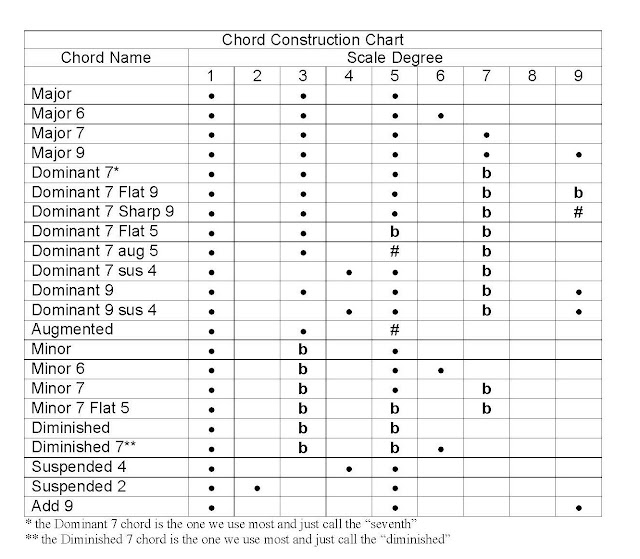 Here are two of the many ways to use it.

One of the appeals (some might say dangers!) of the ukulele is that it is so inexpensive compared to other stringed instruments. Add how easy it is to learn and it becomes easy to start collecting them, and not necessarily on purpose! 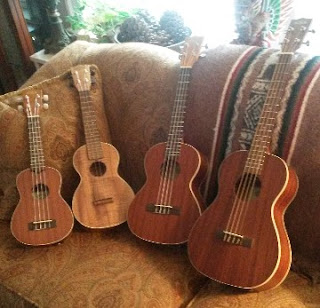 It might start with wanting a few different sizes, but then there's the all weather uke, the acoustic-electric uke,... The novelty ukes! 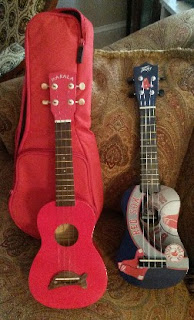 Doesn't everyone need a [your favorite color] ukulele? One with your favorite sports team's logo? Is that baseball, football, basketball, hockey? Or all of the above? I haven't seen licensed soccer team logos, yet. Can they be far behind?

Then, there's the solid body electric uke. They come in two types--steel string and nylon string (which will be my generic term for "non-metal string"). I have tried steel string ukuleles but I have misgivings about steel due to my quaint notion that anything that calls itself a ukulele ought to be able to be played like a traditional ukulele. Steel string ukuleles can be resistant to standard right hand strumming techniques. That brings us back to nylon string ukuleles. 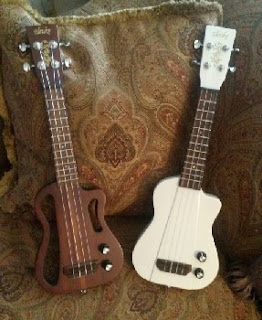 I like the Eleuke. It's strung with Aquila Nylgut, so I don't have to modify my right hand technique to save my hand. One advantage of a solid body uke is it can be played unplugged without annoying anyone when an acoustic uke would be a problem, such as early morning or late evening. Many Eleukes have an mp3 input and headphone output, so you can mix the uke with your mp3 and only you hear it. However, I believe this wasn't true for all models, so anyone who finds these features to be important should check for them.

Closeout models are available at the Eleuke site. My first one came from China with battery leakage. Eleuke sent a replacement battery case. I was anxious about replacing it myself, but the repair was straightforward. It involved nothing more that removing a few screws and unplugging the battery case from the electronics board. When I ordered again, I was careful to specify that the instruments be shipped without batteries.

There was a problem with the tone control in the second Eleuke. I was sent a set of replacement electronics. Again, the replacement was straightforward. The volume and tone control knobs had to be pulled off to access the nuts securing them. Otherwise, it was about the same as for replacing the battery compartment. The only other downside is that shipping from China is slow, so it can take a while if there is an issue to be resolved. To put it in context, though, the problems I experienced would not stop me from ordering again.

The style changes from year to year. My favorite shape is the dark one in the left of the photograph. I'd been haunting eBay looking for one that never appeared. I found the closeout site during a web search. The latest model is the Peanut. I didn't care for it much when it first came out, but it's starting to grow on me. I'm at the "The last thing I need is another ukulele" stage. ...but, they're not that expensive on eBay...

The On/Off switch: One item deserves special mention-the on/off switch. There isn't one, or rather there is, but not one you would normally expect. It's built into the connectors. The Eleuke ON when is connected to an amp or earbuds. Otherwise, it's OFF. Once I learned this through an email exchange with Philip K, the mystery of why the Eleuke's battery would run down overnight sometimes but not always was solved!